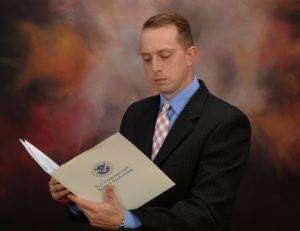 Customs lawyer Jason Wapiennik is admitted to practice in Illinois and Michigan. Great Lakes Customs Law, as our name suggests, maintains offices in Chicago and Detroit to serve our clients.

Jason has years of significant experience in representing client’s before U.S. Customs & Border Protection against product and money seizures as well as penalty actions, both administratively,in Federal District court, and the Court of International Trade.

Jason’s publicly available customs law experience over 450 money seizure cases, over 70 administrative penalty cases for various violations (including trademark penalties), a § 592 penalty case at the United States Court of International Trade, and a $146,815 penalty for allegedly importing counterfeits in the Eastern District of Michigan.

In addition to these public proceedings, customs lawyer Jason Wapiennik has advised and numerous prior disclosures under § 592 for importers, obtained favorable prospective binding rulings, provided guidance to clients on classification, country of origin, and valuation without the need to resort to the formal prospective ruling process.

Jason worked at the small customs law firm Edmund Maciorowski, P.C., in Bloomfield Hills, Michigan from 2007 until founding Great Lakes Customs Law in 2009. He is a graduate of Ave Maria School of Law and Loyola University Chicago. 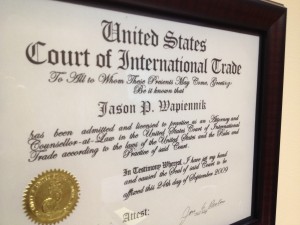 When he’s not doing the work of a customs attorney, Jason enjoys spending time and traveling with his wife Joanna and their two children, Jacob and Victoria.

Get all your questions about our firm answered by a customs lawyer.