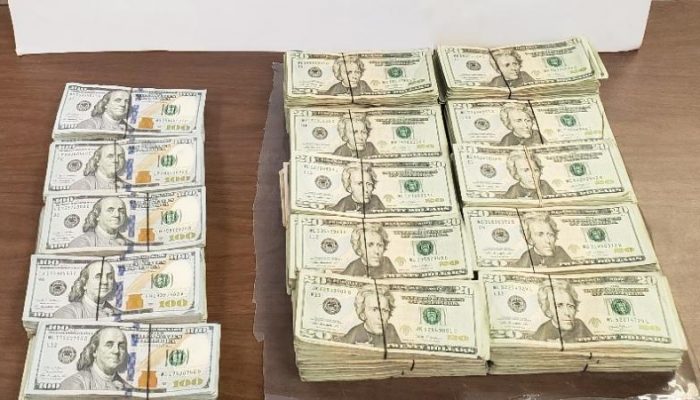 CBP in Brownsville seized nearly $100,000 from a traveler heading to Mexico at the Veterans International Bridge. The story from CBP indicates the man was walking, not driving a vehicle. CBP discovered multiple packages of cash totaling $99,118.

The seizure took place on Wednesday, May 27, when CBP officers working at the Veterans International Bridge encountered a 26-year-old male United States citizen from Brownsville, Texas, who was selected for a routine outbound inspection. CBP officers conducted a visual and physical search of the traveler and the bags he was carrying which resulted in the discovery of multiple packages of bulk U.S. currency totaling $99,118 hidden on his person and within his bags.

“This important currency seizure was possible because of the diligence and watchfulness of our CBP officers,” said Port Director Tater Ortiz, Brownsville Port of Entry.  “I congratulate our officers on this seizure.”

CBP officers seized the currency, arrested the traveler and turned him over to the custody of Homeland Security Investigations (HSI) special agents for further investigation.

Has Brownsville CBP seized your cash?

If Brownsville CBP seized your cash, we urge you to call us for a consultation before considering doing it yourself. You probably will not be happy with the outcome if you do, based on their’ aggressive posture in most cases. Read our trusted customs money seizure legal guide (or watch the videos) and can contact us for a free currency seizure consultation by clicking the contact buttons on this page.