From the Detroit Free Press comes this story about U.S. Customs seizing hundreds of pre-historic fossils for an apparent failure to declare. The article does not make it clear 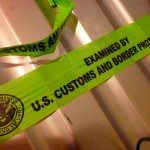 if they were declared at all, or if there was a false declaration (e.g., declared imported for exhibition at a trade show instead of imported for sale). There is probably a reason why the importer(s) never filed a petition for remission to have the fossils returned.

An excerpt of the story follows, with my emphasis in bold:

The fossils — whose origins and age are unknown — were seized in March 2011 after two Canadian men at the Ambassador Bridge claimed they were attending a fossil trade show in Illinois.

A secondary inspection revealed several boxes containing more than 1,100 fossils that were for sale. They were seized because the unidentified men did not properly declare their goods.

[Customs spokesman Ken Hammond] said the agency tried to contact the men several times to reclaim the fossils and pay associated penalties, but they never got back in touch with customs and border protection.

Hammond did not now how much the penalties were. He said the men were not criminally charged. He did not know where the men acquired the fossils.

“The bad part that happened with these individuals is they didn’t declare their intentions to us,” Hammond said, adding that the men would have had to go through the proper importing process.

19 USC § 1497 subjects any article excluded in the declaration and entry made by the importer (and not mentioned before baggage inspection begins) to forfeiture. There could also be a monetary penalty under the same statute equal to the value of the fossils.

Customs can, and does, have authority to donate seized property in certain circumstances. Earlier this year, Customs donated $1.3 million worth of seized property to charities.

An interesting case made it into the regular news cycle lately:

I don’t have time to comment, but it deals with the tariff classification of X-men action figures.

Another customs and trade lawyer points out that there is going to be what should be a useful webinar for importers and brokers called “Recovering Your Seized Cargo”.  Incidentally, he will be one of the presenters. He says,

If you have ever had your money seized by Customs for failure to declare over $10,000, had merchandise seized for misdeclaring its value or not paying enough customs duties, had your bank account seized for alleged trade-based money laundering, or had any other items detained or seized by U.S. Customs for violating another Federal agency’s regulations, you should sign up for this webinar.