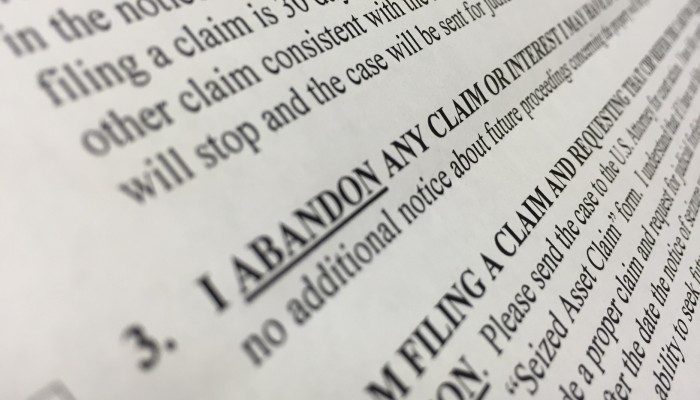 Were you forced to abandon cash to Customs (CBP) after it was seized? Occasionally I get called by someone who says they were forced into abandoning their money while they were being detained and questioned by CBP. We can help.

Why abandon cash to CBP?

The decision to abandon cash is usually coerced by the threat of arrest, threatening statements concerning

prior violations with Customs (for money seizures or other incidents), criminal convictions, or

because person carrying the cash does not want miss their flight, or are told if they abandon it they will not be further questioned.

A chance of being forced to abandon cash by customs is of the many, many, many, many reasons why you should never talk to CBP after a currency seizure; instead, assert your constitutional right to remain silent.

Can I get abandoned cash back from CBP?

At least when done during a detention, abandoning cash might not mean that you have no option to get the money back from CBP. Certainly, it makes the chances of retrieving the cash abandoned to customs harder, but perhaps not always impossible.

Much will depend on how the cash was abandoned. You will probably have been told to sign something, which could either be an election of proceedings form or something like a “notice of abandonment of all rights and interest in property,” which says:

This particular abandonment language has been successfully challenged in court, based on due process violations, coercion, and lack of a knowing and intelligent waiver. In other words, it could be challenged if were you forced into it and had no idea what you were signing and what it meant.

Beyond this, whether an abandonment can ever be successful is another interesting question. There appears to be no particular customs law on abandoning property, such as the laws written concerning administrative petitions, claims, and offers in compromise. Although it’s always an option presented in the CBP election of proceedings form, the form references no statutes or regulations, it simply states:

You may abandon the property or state you have no claim to or interest in it .  . . . The government may proceed with forfeiture proceedings or address claims from other parties concerning the property, without further involving you.

The option does not say if abandoning the property is final, or irrevocable. It also tries to relieve CBP of their duty to provide notice. But, even an argument can be made about whether CBP can waive their obligation under the law to provide notice.

But could an administrative petition be filed with CBP to get back seized cash? Maybe! Could a CAFRA seized asset claim form be filed? Maybe! Could an offer in compromise be made? Maybe! There’s a lot of unsettled questions of law in the area of abandoning cash seized by CBP, to the point where I question whether it could really be irrevocably abandoned.

That leaves a lot of room to negotiate for it’s return, either through CBP or the U.S. Attorney’s Office. That means there’s a fairly decent chance of settling a cash abandonment case.

Were you forced to abandon cash to Customs (CBP)?

The process of getting seized cash back from CBP is, obviously, long, complicated and fraught with numerous problems. You need the advice of a customs lawyer, not this article (which is not legal advice). If you were forced to abandon cash to Customs, you can learn more about the process from our trusted customs money seizure legal guide and can contact us for a free currency seizure consultation by clicking the contact buttons on this page.