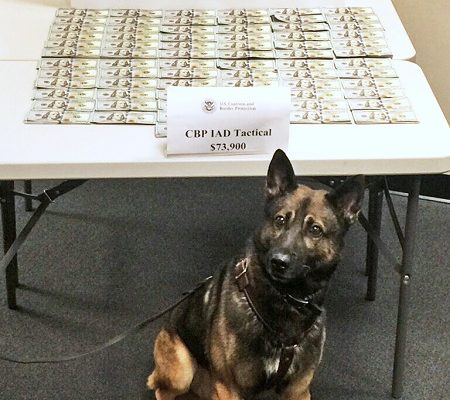 U.S. Customs & Border Protection uses canines to assist its law enforcement functions. When most people think of police dogs, they think of their use in detecting drugs; but they can also be used to find the presence of unreported cash.

And that is the subject of a recent story from CBP in Dulles airport when they seized nearly $75,000 from two men bound for Serbia (also apparently involved in unlawful cash structuring).

Neither man was criminally charged. CBP officers released the travelers to continue their journey.

CBP officers initially stopped the first man in the jetway to the airplane and asked how much currency he possessed.  The man reported $1,500 verbally and in writing.  CBP officers inspected his carry-on baggage and jacket and discovered four envelopes that contained approximately $50,000.

Meanwhile, CBP’s currency detector dog “Nicky” alerted to another passenger, who then claimed to be the first subject’s son-in-law.  The second man reported that he possessed $7,000, but a subsequent inspection discovered two envelopes in his jacket that contained approximately $20,000.

CBP officers verified that the currency totaled $73,900 in U.S. dollars between the two family members.

In this case, the violations of the federal currency reporting laws did not lead to criminal charges, but theoretically they could be charged within 5 years due to the statute of limitations period. But as always, federal currency reporting laws mean that, even when not criminally charged, asset forfeiture of the cash by customs will still occur. In this case, CBP seized almost all of the money. To get it back, these men will have to show that the money has no nexus to illegal activity and, even if they can do that, they will still likely face a loss of at least 50% of the money; CBP’s guidelines for structuring and bulk cash smuggling are far more stringent than their guidelines for a failure to report.

The Loudon Times-Mirror reported on the same story, and added that the dog, Nicky, is a Malinois dog, and that CBP returned $1,500 to the men and released them to continue their trip, which is generally called a “humanitarian release” by CBP.

Have you violated the federal currency reporting regulations?

If you violated the federal currency reporting regulations, you really need a lawyer. Read our trusted customs money seizure legal guide and can contact us for a free cash seizure consultation by clicking the contact buttons on this page.