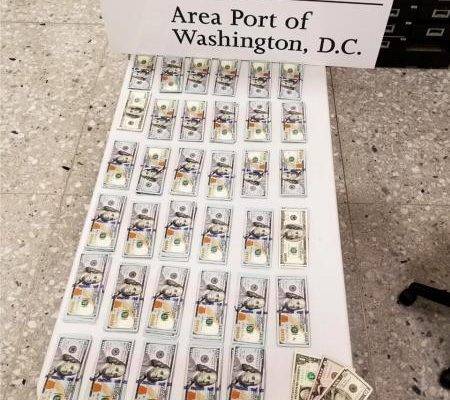 Unfortunately, story states that she only declared having $5000 when she was first stopped. When they searched her bags they found a total of $35,016.

This is a big no-no. Especially in Dulles Airport, not reporting money combined with later discovery of the money in clothing or baggage will typically result in allegations of “bulk cash smuggling”.

When bulk cash smuggling is alleged and proven, CBP can keep at least 50% of the money as a penalty, rather than a usual fixed the dollar amount for the range of value in currency seized. The story follows:

CBP officers encountered the woman, a U.S. citizen, as she boarded her flight. Officers cited the currency reporting law to her and she reported that she possessed $5,000. During an examination of her carry-on bag, CBP officers discovered an additional $30,016 for a combined amount of $35,016.

CBP is not releasing the woman’s name since she was not criminally charged.

“Customs and Border Protection officers offer travelers opportunities to accurately report all currency they possess, and also ensures that the traveler fully understands federal currency reporting laws as well as the consequences for failing to comply,” said Casey Durst, Director of Field Operations for CBP’s Baltimore Field Office. “CBP remains steadfast in our commitment to enforcing our nation’s laws and to protecting our citizens against people and things that could cause us harm.”