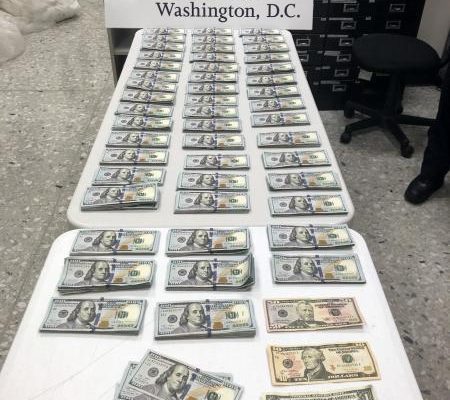 Customs officers at Dulles Airport seized nearly $100,000 this week from a man who only reported traveling with $14,000.

The problem from customs perspective is that he truly had $99,000, and of that amount, almost $80,000 was hidden in his bags, within shoes and pants pockets. The refusal by the man to report the correct amount of cash he transported along with the location of the hidden cash within his baggage will easily allow customs to presume he intended to hide the money so that it would not be found. That is classic bulk cash smuggling.

Bulk cash smuggling, unlike simply inaccurately reporting cash, carries with it steep penalties starting at 50% of the amount of money seized, or in this case, nearly $55,000.

Cases at Dulles is always difficult when it comes to getting seized money back. They are extremely aggressive in processing cases and keeping a maximum penalty. In the nearly 450 cases we have handled, the only time we’ve had a client criminally charged after the seizure has been at Dulles Airport. The man was doing nothing illegal beyond not reporting the money.

That’s why the phrase “an investigation continues” that appears in this story would have me very worried if I were the person who had money seized.

Without further ado, and present the fuller story from customs, along with a picture, below:

While conducting an outbound inspection on the Ethiopia-bound flight, CBP officers interviewed a U.S. lawful permanent resident who is an Ethiopian citizen. The man verbally and in writing reported that he possessed $14,000 and a subsequent examination of his carryon bag revealed $19,112.

Officers escorted the man to CBP’s inspection station and conducted a comprehensive examination of his baggage. Officers discovered an additional $79,650 concealed inside shoes and jeans pockets inside his checked baggage. Officers seized a total of $98,762 of unreported currency. 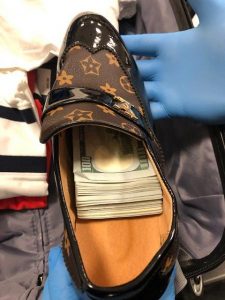 CBP is not releasing the man’s name since he was not criminally charged. An investigation continues.

“This is a significant currency seizure for Customs and Border Protection officers at Washington Dulles International Airport,” said Casey Durst, Director of Field Operations for CBP’s Baltimore Field Office. “Bulk currency being smuggled from the United States may be illicit proceeds from narcotics smuggling, counterfeiting, and other nefarious activities. CBP will remain steadfast in our commitment to intercepting these smuggling attempts and financially hurting transnational criminal organizations where we can.”